Well here we are another year down the road.  I will admit that 2013 has been an awesome year for me.  I have been going strong with my jewelry creations, been published in a major jewelry magazine, published in an amazing digital online magazine, twice,  won a few contests and many other fun things that came along for me. I am grateful for so many things in my life and hope all of my Guardian Angels continue to bless me for the coming years...

I have read on several blogs that people are making their New Year resolutions a little differently. Instead of going on a diet, eating less sugar...things like that...people are choosing a word. I will admit that I have done this before when I was participating in Tangie Baxters Art Caravan a couple of years ago...wow has it been that long?  So this year I think I chose a word that many of us artsy craftsy people want to do every year....  RE-ORGANIZE.  It sounds simple enough right?


To ORGANIZE -
: to arrange and plan (an event or activity)
: to arrange or order things so that they can be found or used easily and quickly
: to put things into a particular arrangement or order
: to gather (people) into a group that will work on something together


Well, below is a picture of my current organization situation... 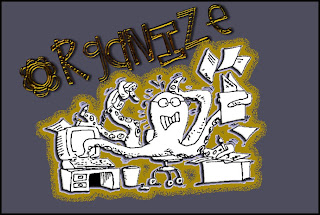 So you see, I really do need to get my act together.  Most of the time my stuff is an organized MESS.  Generally I know where everything is, but if the average person would take one look they would say...OH MY!!!  The problem is...when I start creating...the brain wont shut off until the item or project is finished!  So, if I take something from this drawer and put it on the table..then I need something from another drawer or who knows where...next thing I know my table is covered.  Now the fun part is putting it all back...yea riiiiight!  I may need that item for the next project...so put it in a box...along with a few other things I will need...  So, now I have a little box here and a little box there...  UGH.  You see where this is heading dont you?  So, yes, an organized MESS is more like what I have.
SO, with all of that said....  I am going to work on RE-ORGANIZING my ORGANIZED mess...YAY Wish me luck!!!

THANKS FOR STOPPIN BY!

This is a Flickr badge showing public photos and videos from WingsNScales. Make your own badge here.